Combining general and epidural anesthesia reduces the need for general anesthetics and can reduce risks of respiratory complications and time of stay in hospitals, but the occurrence and severity of hypotension (low blood pressure) are higher compared to general anesthesia alone without proper fluid management.

Traditional management approaches to guide fluid administration including central venous pressure (CVP) monitoring are not considered reliable. Instead of so-called "static" parameters such as CVP, experts recommend the use of "dynamic" parameters that measure variations over the respiratory cycle. Multiple dynamic parameters have been shown to help clinicians predict fluid responsiveness and improve fluid management, but most dynamic parameters require invasive and/or complex methods.

In contrast, PVI is noninvasive and easily obtained with any Masimo SET or rainbow sensor. PVI provides clinicians with a continuous, easy-to-use, and cost-effective measure for assessing whether patients will benefit from fluid administration – enabling personalised and goal-directed fluid therapy.

In the study conducted at Shanghai First People's Hospital in Shanghai, China, Yinan Yu, MD, and a team of researchers assessed the impact of PVI as a goal-directed fluid parameter on tissue perfusion for 30 patients who underwent elective abdominal surgery while administered combined general and epidural anesthesia (GEN-EPI). Investigators used a Masimo Radical-7 rainbow SET Pulse CO-Oximeter, which automatically calculated and displayed PVI.

The researchers noted that higher blood lactate levels in the perioperative period recently have been shown to be related with postoperative complications and the average hospitalization time.

The researchers concluded: "PVI-based goal-directed fluid management in major abdominal surgery patients under GEN–EPI can reduce the amount of fluids administration, especially the crystalloid administration, and the blood lactate levels during surgery. Furthermore, the first hour following GEN–EPI is the critical period for anesthesiologists to optimise the fluid therapy."

Steve Barker, MD, PhD, Chairman of the Scientific Advisory Board of Masimo, stated: "This study demonstrates the clinical advantage of PVI in optimizing fluid management and reducing unnecessary fluid administration for a significant population of patients, and adds to the growing body of evidence that shows how PVI – by aiding clinicians in understanding fluid levels of their patients – can improve patient outcomes while helping to reduce costs."

When someone suffers a stroke, a race against time begins, as a fast diagnosis and subsequent treatment can make the difference... Read more

According to a study published in the April issue of the International Anesthesia Research Society (IARS) journal ‘Anesthesia... Read more 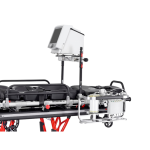