Evaluation of a pilot mobilisation programme in the paediatric critical care unit at Johns Hopkins University found that it is effective and safe in reducing sedation and boosting early mobility. The most commonly reported barrier to early mobilisation after PICU Up! implementation was availability of appropriate equipment. But a change in mindset is required for greater implementation, say the researchers, in an article published in Pediatric Critical Care Medicine.

The PICU Up! Early Rehabilitation and Progressive Mobility Program is intended to maintain or restore musculoskeletal strength and function, and includes activities such as sitting at the edge of the bed, standing, moving from bed to chair, walking and playing with toys.

Senior author Sapna Kudchadkar, MD, assistant professor of anesthesiology and critical care medicine and director of the pediatric critical care clinical research program at the Johns Hopkins University School of Medicine said that clinicians have underestimated what children in intensive care can safely do and current practice is to keep children heavily sedated.

“But fluctuating between a state of awareness and sedation can cause delirium, physical weakness and post-traumatic stress disorder,” she said in a media release.

A working group of physicians, nurse practitioners, physical and occupational therapists, child life specialists, speech pathologists and others developed implementation guidelines and trained existing PICU staff members to use the programme, which required no special equipment. The activity plans have three levels, depending on the child’s physical limitations.

The  proportion of children receiving at least one in-bed activity increased from 70 percent to 98 percent, and the proportion of children who walked by day three increased from 15 percent to 27 percent. The median number of mobilisations per patient by day three in the PICU doubled from three to six. Of the 39 orally intubated children, none walked prior to PICU Up! implementation, compared to four out of 40 orally intubated children who did so afterward.

"The fact that even a few orally intubated children who were previously heavily sedated could be awake, alert and lucid enough to walk is likely to be an eye-opener for clinicians," says Kudchadkar.

The programme also resulted in increased rates of physical and occupational therapy consultations, and increased opportunities for patients’ families to spend meaningful time with their child.

Kudchadkar said: "Even parents whose children passed away due to their critical illness during the study said that being able to communicate with their children and having them mentally present rather than sedated during those last moments was priceless.”

"Once clinicians see how effective the program is and how positively it affects patients and families, change will come," added Kudchadkar.

Matthew and Ashley Pearce, whose daughter Sydney (pictured) was admitted to the Johns Hopkins PICU following open-heart surgery, said: “We would never have thought that Sydney would be walking just 24 hours after surgery, and for as long as she did. Once she became more mobile, she was back to her old self, playing and dancing around.The more Sydney was out of bed and the more she was able to move and play, the less she thought about where she was and what she had been through.” 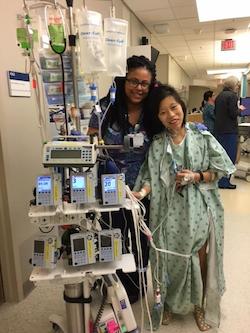 Patients like Eun were encouraged to walk and play while in the PICU, thanks to the PICU Up! program.


Antimicrobial Use for IAI: New Guidance »»

A survey of paediatric intensivists in the U.S. has found that around half are not using current guidelines to diagnose acute... Read more

Study: Cycling in Bed Safe and Feasible for ICU Patients

ICU patients on mechanical ventilation can use an in-bed cycle safely and early in their stay, according to research from McMaster... Read more

Metabolic-based biomarkers have potential to triage children with sepsis

A new study has validated potential biomarkers for a sepsis-triage model to distinguish sepsis patients requiring care in the... Read more