Physical rehabilitation in the ICU: understanding the evidence

Reviews the latest evidence evaluating physical rehabilitation in the intensive care unit setting and future directions for the field. 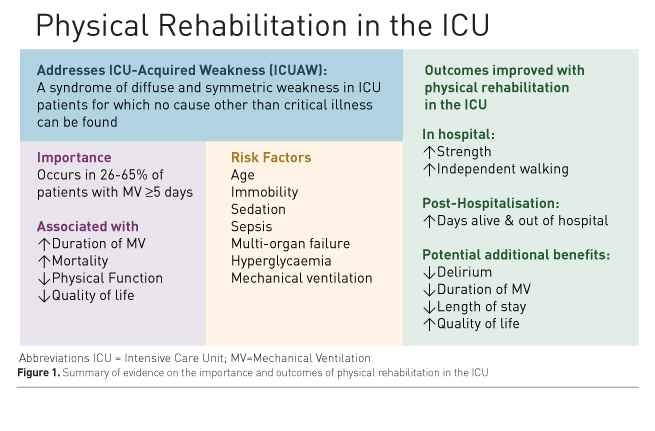 ICU-acquired weakness (ICUAW) is a syndrome of diffuse and symmetric muscle weakness for which no cause other than critical illness can be found (Stevens et al. 2009). Weakness is defined based on physical examination of muscle strength, in an alert and cooperative patient, using the Medical Research Council (MRC) scale. A MRC sum score of <48 (range: 0-60, maximum = 60) is consistent with ICUAW.

Muscle weakness consistent with ICUAW occurs in 11% of all patients admitted to an ICU for ≥1 day (Nanas et al. 2008), with a higher prevalence of 26-65% in patients mechanically ventilated for ≥5 days (Ali et al. 2008; Sharshar et al. 2009; Dinglas et al. 2017). Loss of muscle mass occurs quickly during critical illness. Compared to the day of ICU admission, cross-sectional area of the rectus femoris muscle decreased by 18% at day 10, with necrosis seen in 54% of muscle biopsies (Puthucheary et al. 2013).

Multiple studies have evaluated patient- and ICU-related risk factors for ICUAW. Older age, immobility, sedation, sepsis, multi-organ failure, hyperglycaemia and mechanical ventilation are consistently reported risk factors for ICUAW (Fan et al. 2014a; Puthucheary et al. 2012; Hermans and Van den Berghe 2015; de Jonghe et al. 2009). The most readily modifiable risk factors are immobility, sedation and hyperglycaemia. Steroids and neuromuscular blocking agents have been reported as risk factors (Hermans and Van den Berghe 2015; Needham et al. 2014), but a causal association is not certain (Puthucheary et al. 2012), given that immobilisation and sedation are confounders in most analyses (deBacker et al. 2017; Fan et al. 2014b). While difficult to evaluate in ICU patients, pre-ICU physical status appears to be an important factor for ICUAW and should be considered when evaluating a patient’s risk for ICUAW (Batt et al. 2013; Latronico et al. 2017; Puthucheary and Denehy, 2015).

You might also like: Early Mobilisation in ICU: From Concept to Reality - Four Steps to Change Patient Outcomes

The most direct effects of physical rehabilitation in the ICU may be on strength and physical functioning. A recent meta-analysis reported a significant improvement in muscle strength, measured by the MRC sum score, at ICU discharge (pooled mean difference 8.6, 95% CI 1.4-15.9, p = 0.02) and increased probability of walking without assistance at hospital discharge (OR 2.1, 95% CI 1.2-3.8, p=0.01) in rehabilitation intervention vs. control groups (Tipping et al. 2017). Growing evidence suggests that these improvements in strength and physical function may be greater when rehabilitation is initiated earlier. For instance, a randomised controlled trial (RCT) of physical and occupational therapy (PT, OT) interventions, started at a median of 1.5 days after intubation, vs. usual care (with PT and OT started at a median of 7.4 days after intubation) significantly increased return to independent functional status and walking at hospital discharge (59% vs. 35%, p = 0.02) (Schweickert et al. 2009). Similarly, two additional trials of early goal-directed mobilisation vs. usual care reported a doubling of the proportion of patients walking by ICU discharge (Hodgson et al. 2016; Schaller et al. 2016). By contrast, a RCT of more vs. less intensive PT interventions, beginning a median of 8 days after intubation, found no difference in functional status at 28 days (Moss et al. 2015).

Several randomised trials have demonstrated an improvement in delirium with rehabilitation in the ICU. Early intervention by PT and OT, delivered during daily sedation interruption, resulted in a 50% decrease in delirium duration compared to very similar sedation (i.e., daily sedation interruption) with usual care rehabilitation therapy (Schweickert et al. 2009). ICU delirium-free days by day 28 increased by 3 days in patients managed with early, goaldirected mobilisation vs. usual care (Schaller et al. 2016). Notably, there was no difference in delirium incidence or duration in a RCT of standardised rehabilitation therapy vs. usual care where there was no sedation protocol and sedation levels that commonly prohibited active physical therapy interventions, which may have contributed to the lack of benefit (Morris et al. 2016). A RCT evaluating interventions led by OT (without additional PT involvement) vs. usual care, reported a dramatic decrease in delirium incidence from 20% to 3% in non-mechanically ventilated patients (Álvarez et al. 2017). Finally, pre-post evaluations of quality improvement bundles, including combined sedation and rehabilitation interventions, have resulted in marked reductions in delirium, although it is impossible to isolate the effect of the rehabilitation component in these studies (Balas et al. 2014; Needham and Korupolu 2010; Smith and Grami 2016).

Duration of mechanical ventilation and length of stay

There is no difference in mortality at ICU discharge, hospital discharge, or 6-month followup in existing RCTs. However, “days alive and out of the hospital at 6 months” were significantly greater with rehabilitation vs. standard care in a recent meta-analysis (mean difference 9.63 days, 95% CI 1.68–17.57, p=0.02) (Tipping et al. 2017).

Physical rehabilitation of critically ill patients (Figure 2) is safe (Tipping et al. 2017; Nydahl et al. 2017). A large systematic review of 22,351 mobilisation sessions delivered in 7,546 ICU patients, from a combination of observational and clinical trials, demonstrated a rare frequency of events. Potential safety events, defined as a clinical deterioration or event exceeding a study’s safety limit, occurred in only 2.6% of sessions. Events of consequence, defined as being events associated with cessation of a mobility session, adverse health consequence or requirement of additional therapy, occurred in only 0.6% of sessions. Most potential safety events involved a haemodynamic change or oxygen desaturation that resolved with pause or cessation of mobility. Notably, removal of medical devices and falls were rare, including dysfunction or removal of an intravascular catheter (0.2% of sessions), endotracheal tube removal (0.01%) and falls (0.07%) (Nydahl et al. 2017). 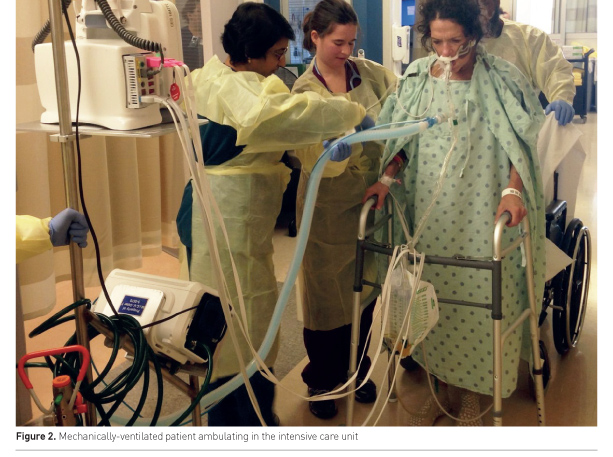 The most pressing questions for consideration in future studies in the field include the optimal type and dose of rehabilitation interventions, timing of initiation of intervention and ICU patient sub-populations (Denehy et al. 2017). While PTs may mobilise patients to a higher level than nurses (Garzon-Serrano et al. 2011), nurses can provide clinically beneficial mobility interventions, as clearly demonstrated in a recent RCT (Schaller et al. 2016). There are many types of interventions to be considered in future studies, including functional mobility, strengthening and use of relevant technology and equipment (e.g., in-bed cycle ergometry, neuromuscular electrical stimulation, tilt tables, interactive video games, hydrotherapy), along with consideration of potentially synergistic interventions with rehabilitation, such as nutritional supplementation (Needham et al. 2009; Sommers et al. 2017; Arabi et al. 2017; Heyland et al. 2015).

There is emerging evidence demonstrating the benefit of earlier vs. later initiation of rehabilitation in the ICU, which should be considered when designing future trials and implementing rehabilitation as part of clinical practice in the ICU. Most studies have had broad eligibility criteria, but it is possible that patients’ pre-ICU baseline status (e.g., frailty and comorbidity) or ICU-based diagnosis (e.g., sepsis) may better identify patients who are most likely to benefit from rehabilitation (Puthucheary and Denehy 2015).

Muscle wasting and weakness commonly develops within days of ICU admission, with effects on survival and physical functioning lasting for years post-discharge. Early-onset physical rehabilitation is a safe intervention in ICU patients that, based on existing RCTs, improves strength and physical functioning, and may improve delirium in the ICU as well as in-hospital and post-hospitalisation healthcare resource utilisation.

Dale M. Needham is a principal investigator on a NIH-funded multi-site randomised trial evaluating nutrition and exercise in acute respiratory failure and, related to this trial, is currently in receipt of an unrestricted research grant and donated amino acid product from Baxter Healthcare Corporation and an equipment loan from Reck Medical Device. The other authors declare that they have no conflict of interest.

Connolly B, Blackwood B, Hart N et al. (2017) Development of a core outcome set for trials of physical rehabilitation after critical illness [Online]. COMET Initiative. [Accessed: 27 May 2017]
Available from http://www.comet-initiative.org/studies/details/288

Implementation of early and structured rehabilitation in ICU

The importance of multidisciplinary team working and communication Early mobility has been shown to be both safe... Read more

Integration of nurse practitioners into the critical care team

A viable approach to meet pressing challenges As the demands of critical care medicine increase one viable option... Read more

The only glucose meters cleared by US FDA and Health Canada for use with all patients, including critically ill   Because of the unacceptably high rate of adverse patient events, including deaths, linked to the point-of-care (POC) use of glucose...

Novalung kits are pump-driven medical devices that enable the extracorporeal blood gas exchange of carbon dioxide and oxygen by diffusion across a gas-permeable and plasma-tight polymethylpentene (PMP) membrane, as well as temperature control of blood...