Share
Download Article Back
The new trends in nutrition management included in the last guidelines are discussed, in particular the route and the dose of calories and proteins recommended.
During the last decade, numerous paradigms and dogmas based on observational cohort studies were challenged by the publication of large multicentre prospective randomised controlled trials (RCT). Actually, until recently, the guidelines were supported by a very low evidence and were frequently expert opinions, implying controversial recommendations (Patel et al. 2017; McCarthy et al. 2016; Preiser et al, 2015). The very recent European Society for Clinical Nutrition and Metabolism (ESPEN) guidelines (Singer et al. 2019) take into account the latest RCT and updated expert opinion. Its content is really useful for the bedside caregiver. Two other publications deserve also a mention as they could help to guide the practical bedside daily nutrition management (Berger et al. 2019; Reintam Blaser et al. 2017). We will briefly focus on the main new principles underlying the nutritional management of a critically ill patient.

Who Should be Nourished?

All the patients admitted to the ICU (Intensive Care Unit) and staying more than 48h are at nutritional risk and deserve particular attention. The general assessment does not differ from any other hospitalised patient (Singer et al. 2019).

The gut should be used if available by oral or enteral route. The oral route is commonly used (Bendavid et al. 2017). So, careful monitoring of the oral intake could permit to detect patients who will benefit from early (within 48h) enteral nutrition. Despite the absence of clear differences between short-term early enteral route and early parenteral route in recent RCTs (Harvey et al. 2014; Reignier et al. 2018), the former route is still recommended when there is no contraindication. The arguments are mainly the maintenance of the intestinal barrier integrity by the EN (trophic feeding) and its low cost. The list of contraindications to the enteral route decreased year by year and the ESICM (European Society of Intensive Care Medicine) clinical practice guidelines formulated 17 recommendations for specific conditions (Reintam-Blaser et al. 2017). They were endorsed by the ESPEN Guidelines and they more clearly defined the situation necessitating a careful usage of the enteral route (Table 1) (Singer et al. 2019).
When the enteral route is not available, a parenteral nutrition (PN) should be implemented at a later stage, before the seventh day after admission. The importance of permissive underfeeding to avoid overfeeding during the acute phase (3-7 days) is emphasised (Reintam-Blaser and Berger 2017) and a full feeding (i.e. calculated to match energy expenditure (EE) and protein losses) was discouraged during the first days (Singer et al. 2019; Preiser and Wernerman 2017). A progressive increase of the intake is then recommended.
Historically, numerous observational studies showed that a low caloric and protein intake is associated with poor outcomes (Alberda et al. 2009; Villet et al. 2005). However interventional studies failed to demonstrate that increasing the caloric intake to the level of EE measured or predicted improved the outcome (Rice et al. 2011; Allingstrup et al. 2017; Arabi et al. 2015; Peake et al. 2014). As the enteral route could be insufficient to reach this target, the parenteral route (supplemental) was tested (Heidegger et al. 2013; Singer et al. 2011; Casaer et al. 2011; Harvey et al. 2014; Doig et al. 2013). However, the results did not show any consistent improvements in the mortality or the morbidity of the critically ill patients and even suggest that early full intake is deleterious (Zusman et al. 2016). The actual recommendation is to administer hypocaloric nutrition (not more than 70% of EE) during the early phase of acute illness and to increase the caloric delivery after day 3 up to 80-100% of measured EE if a reliable method of measurement is used (Singer et al. 2019). The indirect calorimetry is nowadays the sole reliable method available but is not widely accessible (Rattanachaiwong and Singer 2019). The alternative method, the predictive equations were clearly unreliable leading to individual unpredictable underfeeding or overfeeding. This justifies the preferred use of hypocaloric nutrition over isocaloric nutrition for the first week of ICU stay when these equations were used (Singer et al. 2019).
The gold standard indirect calorimeter was not sold since more than 20 years and the devices manufactured during the last decades were known to be unreliable (Fraipont and Preiser 2013). A group of experts sponsored by the ESICM and the ESPEN worked in collaboration with the industry to conceive a new tool without the inconvenience of the older ones (Oshima et al. 2017a). This apparatus was released last year and promises to be useful. It is light, easily mobilised, with easy calibration process, equipped with a friendly touch screen and interface, easy to use and seems to be reliable in in-vitro mass spectrometry validation studies (Oshima et al. 2017b).
The management of difficult EN achievement is not different from the past and call on prokinetics and lastly post-pyloric route. When the prescribed dose of EN is not reached after one week, a supplemental PN should be considered on a case by case basis (Singer et al. 2019).
Recent interests emerged and focused on the possible role of an increased protein intake (Preiser, 2018; Weijs 2018); however very few controlled data were available (Rugeles et al, 2013; Fetterplace et al. 2018; Allingstrup et al. 2017) and some warnings signs emerged from retrospective analysis (Casaer et al. 2013; Koekkoek et al. 2019). Therefore, the dose of protein recommended is 1.3 g/kg protein equivalents per day in opposite with the more generous guidelines of the Society of Critical Care Medicine and American Society for Parenteral and Enteral Nutrition (McClave et al. 2016).

Additional enteral doses of glutamine are limited to patients with burns > 20% body surface area or critically ill trauma. In case of unstable or complex ICU patients with hepatic or renal failure, intravenous supplements are also not recommended. The use of enteral omega-3 fatty acids is limited to nutritional doses. High doses of antioxidants is also not recommended but micronutriments (trace elements and vitamins) should be provided at the daily recommended dosage if the patient is under exclusive PN or if he did not receive sufficient EN (Singer et al. 2019). For the first time, following the result of a recent interventional study (Amrein et al. 2014), the guidelines pay attention to vitamin D recommending its dosage and supplementation with high doses in case of severe deficiency (Singer et al. 2019).

The importance of detecting dysphagia that could limit the oral intake is underlined as this dysfunction is very frequent in the critically ill patients (Zuercher et al. 2019). Following the publication of a large study on early EN versus early PN in ventilated adults with shock (Reignier et al. 2018) that showed possible harmful with the enteral route, the statement is that early and progressive EN should be used in septic patients after haemodynamic stabilisation (Singer et al. 2019). Early EN was also suggested in patients that were classically not good candidates for EN (Table 1) (Singer et al. 2019). 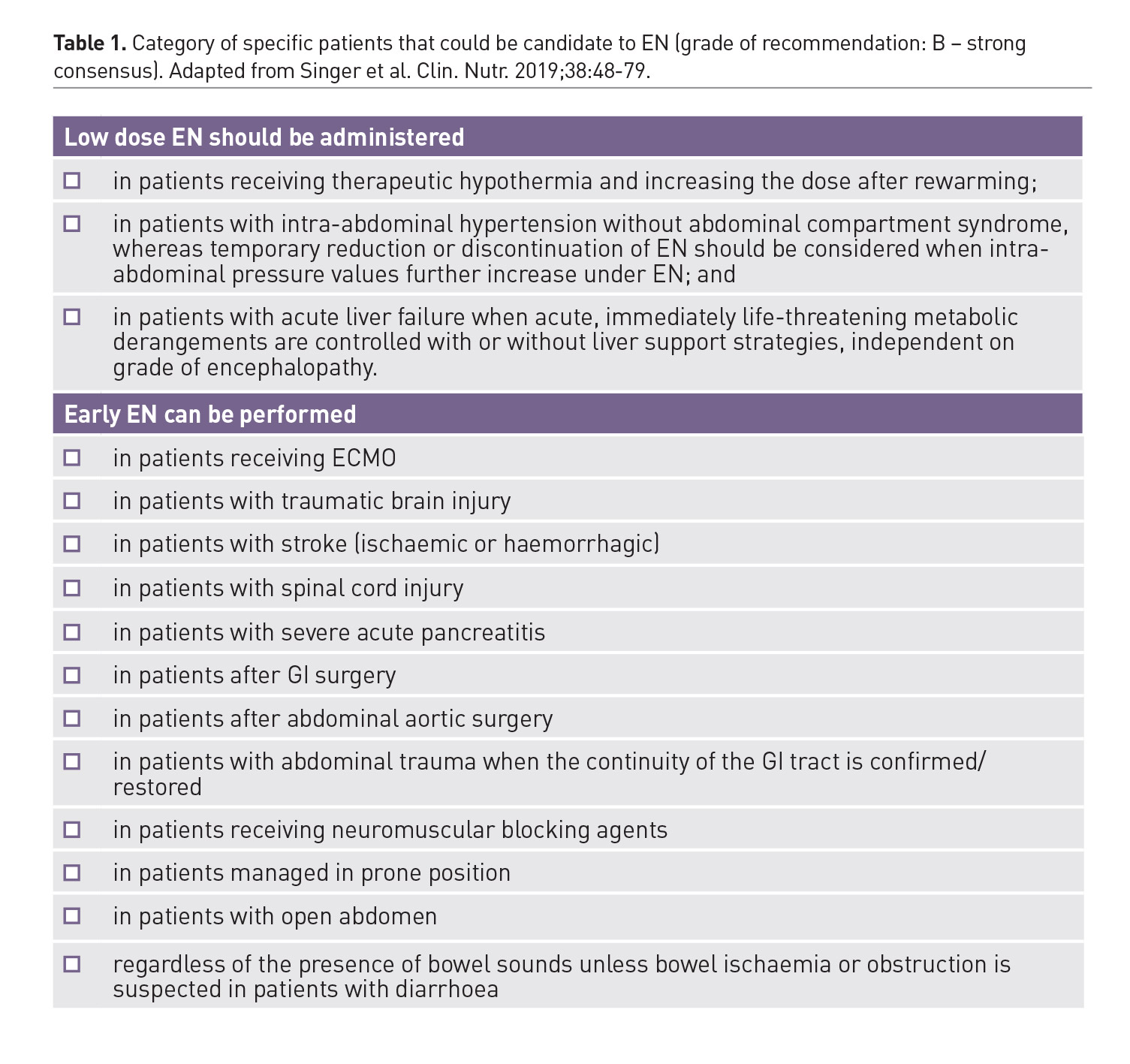 As the proportion of obese patients increases in most of the countries (Schetz et al. 2019), this setting is discussed in the ESPEN guidelines. The energy intake should be guided by indirect calorimetry and an iso-caloric high protein diet can be administered even if the grade of recommendation is low (Singer et al. 2019).
Close monitoring of the blood glucose and electrolytes is still the rule. A particular focus is made on the detection and management of the refeeding syndrome. Indeed, a large RCT showed that restricted energy supply during 48h followed by progressive increase in patient with refeeding hypophosphataemia (< 0.65 µmol/l or a drop of > 0.16 µmol/l) saves life (Doig et al. 2015).

A great number of recommendations were not based on high evidence and a group of experts published (Arabi et al. 2017) a research agenda in nutrition and metabolism to be done in the next 10 years. We hope that these future researches will provide clearer pragmatic attitudes for the practitioner involved in nutritional management.

Microbiome in Sepsis and COVID-19

Bacteria play a fundamental role in human life. Given the many roles of gut microbiota in critical illness and other pathological... Read more

Human factors are significant contributors to drug error. To overcome some of these human factors, we propose standardisation... Read more

What Did We Learn From Nutritional Monitoring?

Monitoring nutrition in the ICU is significantly different from monitoring other activities. For example, if we look at haemodynamics,... Read more