Share
Download Article Back
An individualised goal-directed approach to managing coagulopathy is recommended to treat bleeding trauma patients.
Severe trauma is a great burden to society, with millions of victims worldwide.
If trauma patients are hazardly bleeding, surgical bleeding requires the surgeon to fix the problem, while coagulopathy requires management with an algorithm that includes monitoring and specific treatment. About 30% of all major trauma patients have a significant coagulopathy at hospital admission (Maegele 2010).
In most trauma patients low fibrinogen concentration is a key element of their coagulopathy. Fibrinogen is central to the coagulation system as it is vital for platelet aggregation and a key substrate of plasmatic coagulation (Spahn et al. 2013). Fibrinogen is the coagulation ‘element’ that becomes critically reduced first in many clinical situations, including trauma. The critical level of fibrinogen may be < 1.5-2.0g/L or a maximum clot firmness (MCF) in FIBTEM of < 7mm, or even < 10mm, as measured by a point-of-care rotational thromboelastometry (ROTEM) device.
Unlike red blood cells (RBCs) and platelets there are no fibrinogen stores in the body that might be mobilised. When bleeding lasts a long time and lost volume is replaced with crystalloids and/or colloids, haemoglobin goes down exponentially. At a certain stage it does not go down anymore despite ongoing blood loss, because RBCs are mobilised. Platelets can also go down, but they can be stabilised or increased at a later stage since also platelets can be mobilised. This is not the case for fibrinogen. The more bleeding is ongoing the more likely the need to replace fibrinogen with exogenous fibrinogen.

A systematic review of randomised controlled trials using fresh frozen plasma (FFP) concluded that for most clinical situations the evidence for clinical efficacy is limited (Stanworth et al. 2004). FFP is an important source of factor V in demonstrable multi-factor deficiency with severe bleeding (Stanworth et al. 2004), but there is limited data on use in liver bleeding. Guidelines state that whether and how much FFP to use to treat a patient with massive blood loss should be guided by timely tests of coagulation, including near-patient tests. Formulae to guide replacement strategies should not be used (Stanworth et al. 2004).
FFP transfusions are associated with major adverse outcomes, including increased mortality (Welsby et al. 2010), increased multi-organ failure (Watson et al. 2009), increased infection (Sarani et al. 2008), increased transfusion-associated lung injury (TRALI) (Silliman et al. 2005; Rana et al. 2006; Eder et al. 2007; Chaiwat et al. 2009), transfusion-associated circulatory overload (TACO) (Rana et al. 2006) and, most importantly, inefficacy in treating coagulopathy (Weber et al. 2012; Innerhofer et al. 2017; Stein et al. 2017a).
The more bleeding there is, the more likely the need to replace fibrinogen from other sources to achieve a minimum fibrinogen concentration of 1.5 to 2 g/L. Sources of fibrinogen are FFP, fibrinogen concentrate and cryoprecipitate. The range of fibrinogen concentration in FFP is 1 to 3 g/L, and is highly variable between units (Levy and Goodnough 2015).
Pathogen inactivation reduces fibrinogen concentration further and consistently to a concentration below 2g/L. If several units of FFP are transfused at a time a vicious cycle starts (Table 1). 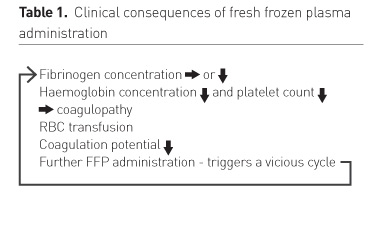 There is guidance on how to use fibrinogen replacement therapy in acquired bleeding (Levy and Goodnough 2015; Theusinger et al. 2017; Garrigue et al. 2018).

In a goal-directed approach to coagulation management, it is essential to measure and monitor fibrinogen concentration. However, laboratory measurement of fibrinogen concentration is difficult. Solomon et al. (2014) showed that six laboratories had differences of fibrinogen concentration measurements of 80% between them for 30 patient samples, before, during and after cardiopulmonary bypass. The first international standard established by the World Health Organization for fibrinogen concentrate is 10.4 g/L (National Institute for Biological Standards and Control 2008); the results in this study varied from 2-12 g/L. In addition, the laboratory value takes at least 30 to 60 minutes to reach the doctor ordering the test.
Therefore, it is best to base the coagulation algorithm on a ROTEM or thrombelastography (TEG) monitoring device. In 10 minutes there is a clear answer if there is something wrong with the coagulation and what is wrong. There are concerns that this technology is expensive. However, the UK National Health Service found consistent cost savings in viscoelastic point-of-care testing compared with standard lab tests to assist with diagnosis, management and monitoring of haemostasis in cardiac surgery and particularly trauma (Whiting et al. 2015). Their systematic review of 31 trials (11 in cardiac surgery with 1089 patients) showed reduction in blood product use [RBC RR 0.88 (0.80-0.96); FFP RR 0.47 (0.35-0.65)] and platelets RR 0.72 (0.58-0.89). And it is efficacious. A prospective study that randomised patients after heparin reversal following cardiopulmonary bypass compared coagulation management based on conventional laboratory analyses with two algorithms, intra- and postoperative, based on ROTEM. The ROTEM group received fewer RBCs and did not receive FFP; platelets were about the same, fibrinogen usage was the same, there was no rFVIIa anymore and the cost of haemotherapy (including cost of monitoring, blood products and factor concentrate) was about half. The patients in the ROTEM group had better survival at 6-months (Weber et al. 2012).
Some have suggested that practice in trauma patients should be based on the Pragmatic, Randomized Optimal Platelet and Plasma Ratios (PROPPR) study, believing that it proved that 1:1:1 (platelets:FFP:RBC) is better than 1:1:2 (Holcomb et al. 2015). However, the primary outcome, 24h-30 day mortality, was similar between the two formulae. Nascimento et al. (2013) showed that a 1:1:1 ratio is inferior to a control group treated based on a laboratory-based algorithm.
The European guideline on management of major bleeding and coagulopathy following trauma recommends that routine practice includes early and repeated monitoring of coagulation, using either a traditional laboratory determination of fibrinogen concentration [prothrombin time (PT), activated partial thromboplastin time (APTT) platelet counts and fibrinogen] and/or a viscoelastic method (ROTEM or TEG) (Rossaint et al. 2016). Measurement is required after each treatment to ensure that fibrinogen remains.

The European guideline recommends that tranexamic acid be administered as early as possible to the trauma patient who is bleeding or at risk of significant haemorrhage at a loading dose of 1g infused over 10 minutes, followed by an IV infusion of 1g over 7 hours (Rossaint et al. 2016).
In a prospective, multicentre observational study (TXA in the EMS on the Helicopter and the Ambulance, NCT 02354885), our group gave 1g of tranexamic acid intravenously early on scene to 70 trauma patients (Stein et al. 2018). The control group (n=38) did not receive tranexamic acid. The coagulation of these control patients deteriorated until hospital admission. In contrast, patients who received tranexamic acid on scene had clot stabilisation on arrival at the emergency department(ED). There were four cases with documented hyperfibrinolysis on-scene in the tranexamic acid group; in all these cases there was no sign of hyperfibrinolysis detectable at hospital admission.
Therefore, 90 minutes after the initial dose of 1g tranexamic acid re-dosing is required with an individualised goal-directed strategy to keep the fibrinogen level to a minimum of 1.5 to 2.0 g/L.
In a recent prospective multicentre observational study in major trauma patients receiving tranexamic acid on scene, plasma concentration was measured at hospital admission (Grassin-Delyle et al. 2018). The study authors propose a dosing scheme to maintain a specific target blood concentration.
The European guidelines recommend treatment with fibrinogen and cryoprecipitate if significant bleeding is accompanied by viscoelastic signs of a functional fibrinogen deficit or a plasma fibrinogen level of less than 1.5-2.0 g/L (Rossaint et al. 2016).
Some express caution over giving fibrinogen to patients as it may induce higher than normal plasma fibrinogen levels after major trauma. However, in their study of the time course of plasma fibrinogen, Schlimp and colleagues (2016) showed that fibrinogen concentrate treatment at admission does not lead to higher fibrinogen, concentration levels post-trauma beyond that occurring naturally due to the acute phase response.

The European guidelines recommend early use of prothrombin complex concentrate (PCC) for the emergency reversal of vitamin K-dependent oral anticoagulants (Rossaint et al. 2016).
One study showed that using four-factor PCC compared to plasma had much faster vitamin K antagonist reversal in patients needing urgent surgical or invasive interventions (Goldstein et al. 2015), which is key in traumatised patients. PCCs are also indicated according to the European guidelines, if there is evidence of delayed initiation of coagulation using viscoelastic monitoring (CT in EXTEM), but the condition is that fibrinogen has been normalised. Therefore, we normalise fibrinogen first and give PCCs only if the CT remains elevated after fibrinogen administration.

Traditional management of coagulopathy was compared with an individualised goal-directed coagulation and transfusion protocol during two time periods (Stein et al. 2017a). During the first period (2005-2007) we used traditional management and in the second period (2012-2014) a protocol that included primary whole-body CT, tranexamic acid, restrictive fluid therapy (preferably crystalloids), permissive hypovolaemia/hypotension and damage control surgery, according to the European guidelines. The outcome was the comparison between the observed and the Trauma Associated Severe Haemorrhage (TASH)-predicted massive transfusion rate to ICU admission. The simple coagulation algorithm is shown in Table 2 (Stein et al. 2017b). 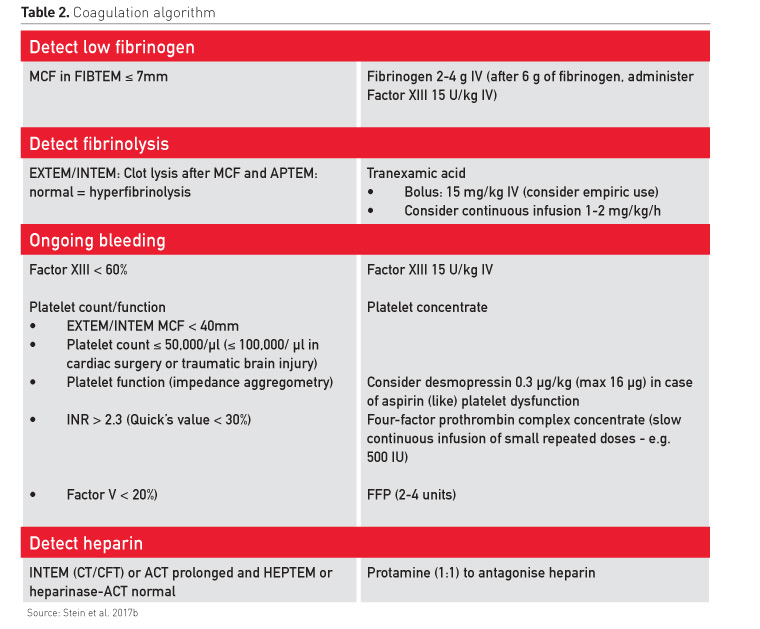 In the second period the goal-directed protocol resulted in half the expected massive transfusion rate predicted, the same platelet count and fibrinogen, more tranexamic acid and no rFVIIa (Stein et al. 2017a). ICU length of stay (LOS) was reduced by 3 days, ventilatory support reduced by 4 days (Figure 1). Also mortality was reduced (Figure 2). 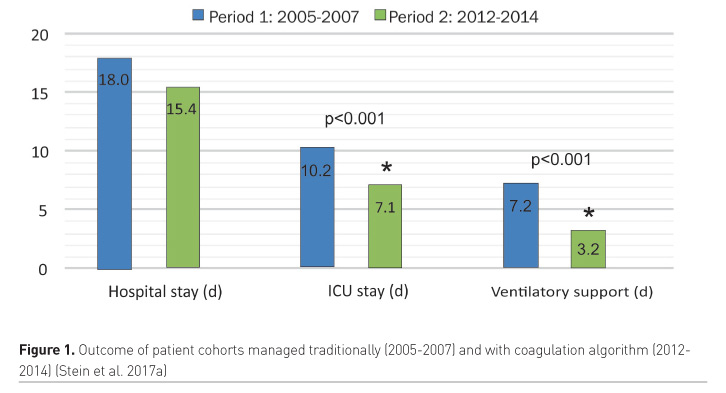 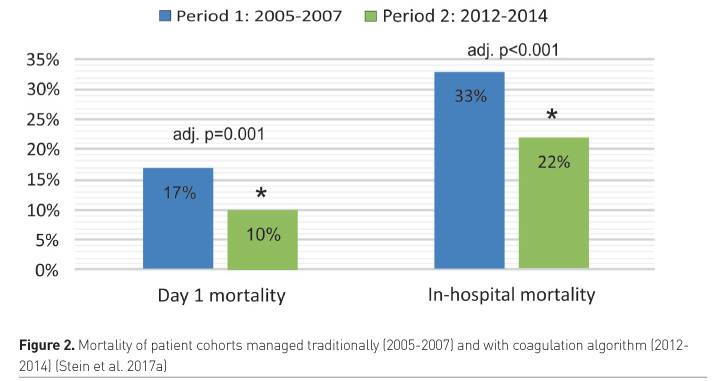 The fifth edition of the European Trauma Treatment Guidelines that have already been cited 1650 times and downloaded... Read more

The critically ill patient is often unable to feed by mouth. This condition, in some patients, can range from days to months.... Read more

It is time for improved fluid stewardship

A conceptual framework for developing institutional programmes and guidelines to enhance fluid stewardship (especially in the... Read more

Fluid management during shock from physiology to bedside. Shock is a common life-threatening, generalised form of acute... Read more

What should we stop doing in the ICU?

In this article, I highlight that the most important thing intensive care physicians should stop doing is ignoring that... Read more

The next generation in Clinical Chemistry Solutions.  The world is digitizing rapidly in order to deliver enhanced patient care and satisfaction, more effective data and increased efficiency, and your Lab is no exception.   Productivity for...