Facilitated glucose control in the ICU through nutrition

As recently as 2010, the view of metabolic requirements for patients admitted to ICU was that all patients had the same metabolic needs and could therefore be managed with the same nutritional product. In general, critically ill patients were fed along the same lines as healthy people in the ratio of around 50% carbohydrates, 35% lipids and 15% protein. However, little benefit has been found from this approach or from the strategy of “temporary starvation” to patients in the ICU who cannot otherwise feed.

During starvation, protein is often used as an energy source rather than as an anabolic precursor to muscle synthesis. In the absence of glucose there is a lack of substrate for the formation of pyruvate, which leads to a decrease in the uptake of protein into tissues. Instead dietary proteins are broken down into amino acids to provide an alternative energy source. The goal of medical nutrition therapy in the critically ill is to maximise anabolism, minimise catabolism and minimise oxidation of amino acids.

The way in which patients are fed can have an impact on sugar levels and insulin infusion rates. In the EDEN study, 1000 adults with acute lung injury requiring mechanical ventilation were randomised to receive either trophic or full enteral feeding for the first 6 days.27 Although the feeding strategy had little effect on mortality, infectious complications and ventilator-free days, the trophic group had lower plasma glucose levels and required lower insulin infusion rates to achieve BG targets.

The first study to investigate the concept of permissive underfeeding evaluated the effect of restricting non-protein calories compared to standard enteral feeding in 894 critically ill adults while maintaining the full recommended amount of protein in both groups.29 There was no difference in any of the many clinical outcomes that were measured such as mortality, days free from mechanical ventilation, length of ICU stay and length of hospital stay.

We have recently completed a study, as yet unpublished, to determine whether blood glucose control could be facilitated by using an enteral nutrition formula containing a low level of carbohydrates, lower medium chain triglycerides, and very high levels of hydrolysed whey protein, to ensure optimal protein delivery. The DIVINE study was an open label multi-centre randomised trial carried out at seven academic medical centres in the USA. It was planned to enrol 280 patients with the aim of 160 completing five days of enteral nutrition. The study ran for almost two years, from August 2014 through July 2016.

Patients were included if they were mechanically ventilated, critically ill, obese or overweight (BMI 26 to 45), and required enteral nutrition for at least five days. Patients were excluded if they had liver failure, trauma or were planned for major surgery. 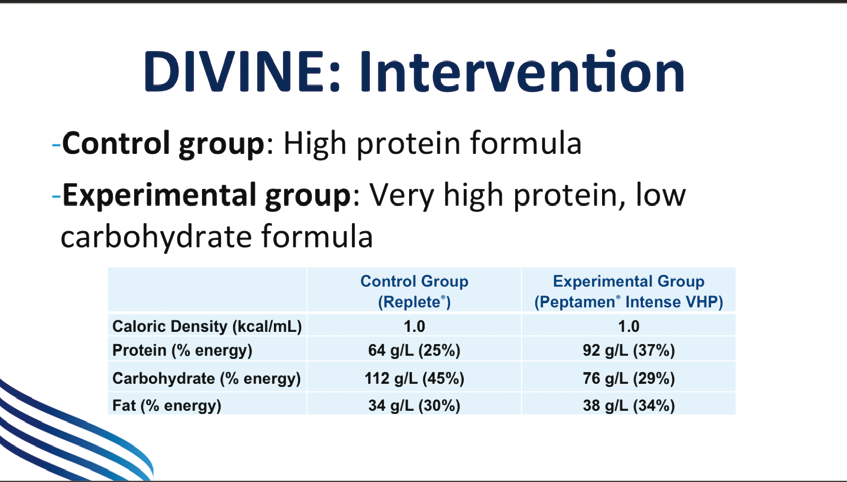 Both feeds had a caloric density of about 1kcal/ml, but the protein in the experimental group was about 50% higher at 92g/L while the carbohydrates were about a third lower at 76g/L, and the fat content was fairly similar in both groups at 38 and 34g/L. The aim was to deliver 1.5g/kg of ideal body weight per day of protein.

The primary endpoint was the rate of glycaemic events in the first seven ICU days as defined by blood glucose levels outside the interval of 6.1 to 8.3mmol/L. Secondary endpoints included blood glucose, markers of nutritional status, urine and serum ketones, insulin and dextrose administered, and clinical outcomes.

One hundred and five patients were randomised (53 control and 52 experimental) and 102 were included in the intention to treat (ITT) analysis. There were 51 patients in each arm. The groups were similar apart from a greater number of women in the control group.

Regarding nutritional intake, the experimental group received significantly fewer calories and carbohydrates than the control group as planned, and both groups received about the same amount of protein. Over the seven days of the study, caloric intake was about 60% of the planned intake in both groups, and slightly more than 60% of the protein target, which was 1.2g/kg compared to the target of 1.5g/kg.

To conclude, in the DIVINE study a very high hydrolysed whey protein and low carbohydrate formula facilitated blood glucose control in critically overweight and obese patients. Although the formula did not reduce the incidence of blood sugar events outside the interval of 6.1 to 8.3mmol/L, it did lower the dispersion of blood glucose, resulted in a lower incidence of hyperglycaemia (>8.3mmol/L), increased the incidence of normoglycaemia and decreased insulin use without increased adverse events.


Brain impairment in sepsis patients: is gut bacteria to blame? »»

The Expanding Boundaries of ICU Nutrition

This symposium explores the different aspects of nutrition in the ICU and how nutritional requirements of the critically ill patient... Read more

An overview of nutrition management in the ICU Read more

New ESPEN Guidelines for Nutrition in the Critically Ill: Help, What Happened!?

This symposium explored controversial aspects of the nutritional management of patients in the ICU. There are new concepts... Read more

Out with the saline?

Reduced use linked to better outcomes Two companion studies have shown that use of saline as intravenous fluid therapy,... Read more

Summary of the DIVINE clinical trial As recently as 2010, the view of metabolic requirements for patients admitted to ICU was that all patients had the same metabolic needs and could therefore be managed with the same nutritional product. In general, critically ill patients were fed along th