Share
Download Article Back
The rationale, indications and challenges of extracorporeal lung assist in trauma patients with severe acute respiratory distress syndrome is given on  the basis of clinical and scientific experience.

Traumatic lung injury is often present in multiple trauma with a wide spectrum of severity. In a large cohort study, patients with multiple trauma were reported to suffer from acute hypoxaemia in 64% of cases (Howard et al. 2015), 46% of whom developed the acute respiratory distress syndrome (ARDS) (Ferguson et al. 2012). ARDS is characterised by a life-threatening impairment of the pulmonary gas exchange, resulting in hypoxaemia, hypercapnia and respiratory acidosis and requiring acute rescue measures (intubation and lung protective mechanical ventilation, adequate positive end-expiratory pressure (PEEP), positioning manoeuvres). Therapeutic advantages in the critical management of severe trauma or thoracic injuries have been made, but these diagnoses present a challenge and are still associated with increased mortality and morbidity (Shah et al. 2008). Mechanical ventilation can damage the lungs and initiate an inflammatory response contributing to extrapulmonary organ dysfunction or triggering multiple organ failure. In trauma patients with critical respiratory insufficiency a benefit from rescue extracorporeal lung support (ELS) is discussed.

Venovenous extracorporeal membrane oxygenation (vvECMO) is used with an increasing tendency to avoid critical oxygenation impairment, and to reduce harm from ventilation in patients with severe ARDS (Del Sorbo et al. 2014). In principle, during ECMO a pump is integrated in an extracorporeal circuit after cannulation of two central veins. In this circuit an artificial membrane enables an extracorporeal gas exchange across the hollow fibres. vvECMO is indicated in patients with severe ARDS within 7 days after onset and with persistent life-threatening hypoxaemia despite optimised supportive therapy. Venovenous extracorporeal CO2  removal (ECCO2R) is an ECMO technique that works at lower extracorporeal blood and sweep gas flows than vv– and avECMO, which is mainly used to avoid unacceptable hypercapnia or acidosis, as such preventing the need for injurious ventilator settings (Morimont et al. 2014). All ECMO techniques implicate certain haemodynamic effects and risks and their use requires expertise, experience, routine and an interdisciplinary approach (Combes et al. 2014). Possible complications include technical problems (clotting, air leakage, haemolysis) as well as bleeding due to cannula insertion or systemic anticoagulation. Despite the fact that technical advances have promoted safety and simplicity of extracorporeal lung support systems during the past few years, rigorous evidence of optimal indication, timing and management is still lacking. Nevertheless ECMO is increasingly being used as a rescue therapy in ARDS patients, and it might show a survival benefit in future randomised studies.

Trauma patients with critical hypoxaemia and/ or hypercapnic acidosis are at risk for pulmonary and cardiocirculatory failure, especially with concomitant haemorrhagic complications or anaemia. Furthermore, invasive mechanical ventilation in ARDS may induce harmful effects of high inspiratory pressure and lung overinflation to the right ventricle (Repesse et al 2015). Although there is a rationale for the use of ECMO in these clinical situations, ECMO is seen as an invasive measure with potentially severe complications, and in the early posttraumatic period patients are in a fragile balance at risk of haemodynamic instability or shock. In recent years, the feasibility and efficacy of ECMO in severe posttraumatic ARDS was described by a few observational studies (a synopsis is presented in Table 1). Cordell-Smith et al. published a retrospective analysis of a cohort of 28 trauma patients with long bone fractures, blunt chest trauma or combined injuries referred to a single tertiary centre for ECMO support (Cordell-Smith et al. 2006). The survival rate in this group was 71.4%. 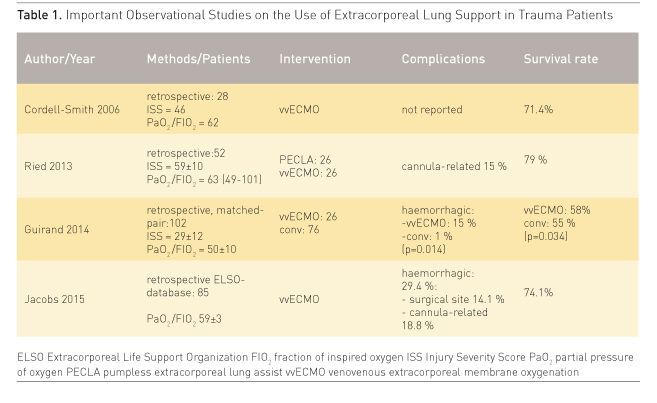 The experiences of the Regensburg ECMO group were reported in 2013 (Ried et al. 2013). 52 trauma patients with a mean age of 32 ± 14 years suffering from severe thoracic trauma and ARDS were provided with pumpless arteriovenous extracorporeal lung support (PECLA n=26) or with vvECMO (n=26). After applying ELS critical hypoxaemia and hypercapnia were resolved immediately and the parameters of mechanical ventilation were reduced in order to perform lung protective ventilation. The mean duration of ELS support was 6.9 ± 3.6 days. During ECMO treatment numerous thoracic and non-thoracic surgical procedures were necessary, but in this series no relevant life-threatening bleeding complications were observed. Similarly Guirand et al. reported data from two American College of Surgeons-verified level 1 trauma centres (Guirand et al. 2014). Trauma patients were divided retrospectively into a cohort of hypoxaemic patients, who received vvECMO after failure of ‘conventional’ rescue (n=26), and into a patient group managed with mechanical ventilation (n=76). In a matched-pair analysis the adjusted survival rate was greater in the ECMO group (adjusted OR 0.193, p=0.034), but ECMO patients received more transfusions and had more bleeding complications. Finally the recent analysis of the Extracorporeal Life Support Organization (ELSO) database on ECMO in 85 trauma patients (Jacobs et al. 2015) demonstrated a survival to discharge of 74.1%. The general conclusion was that the use of ELS might be advantageous in patients with post-traumatic ARDS. An algorithm for the use of ECMO in trauma patients is given in Figure 1.

The use of ECMO in trauma patients is associated with specific requirements and possible problems. It is a challenge for a high-level trauma centre. Some practical aspects and specific clinical strategies must be considered and should be reflected in an algorithm for the ICU team (Table 2).

Haemodynamic monitoring includes continuous monitoring of arterial blood pressure, repeated echocardiography and continuous recording of extracorporeal blood flow. Of note, pulse contour analysis-based or continuous thermodilution-based cardiac output monitoring are not recommended in patients under ECMO, since the first may underestimate cardiac output (Haller et al. 1995), and the second may lead to erroneous results caused by indicator loss into the extracorporeal circuit (Rauch et al. 2002). Accurate record of the cumulative fluid seems important, since a positive cumulative fluid balance has been identified as one independent predictor of worsened outcome of ECMO patients (Schmidt et al. 2014).

The demand for systemic anticoagulation to prevent circuit clotting might favour bleeding complications. On the other hand continuous technical advances (heparin-coated circuits, centrifugal pump) have reduced the required doses for anticoagulation and allowed use even in severe trauma patients with bleeding shock (Arlt et al. 2010). In the Regensburg ECMO Centre experience (Ried et al. 2013) the continuous anticoagulation with heparin was balanced, aimed at a target partial thromboplastin time (aPTT) ≈ 50 sec, and no severe bleeding complications — even under thoracic and non-thoracic surgeries — were observed.  The median demand of packed red blood cells was 3 (range 0-54) during the ECMO period. In patients with severe ARDS, who are suffering from traumatic brain injury and intracranial bleeding, ECMO therapy is considered to be contraindicated due to limited systemic heparinisation. On the other hand these patients might benefit from ELS to avoid hypercapnia (increase of intracranial pressure) and deleterious ventilation. The use of prolonged heparin-free ECMO was reported in three multiple-injured ARDS patients with traumatic brain injury (Muellenbach et al. 2012), and neither ECMO-associated bleeding nor clotting of the extracorporeal circuit occurred. Such a heparin-free ECMO strategy might be considered individually under specific rescue conditions in an interdisciplinary round.

In the early post-traumatic period patients frequently need transportation from the intensive care unit to diagnostic (e.g., CT scan, interventional radiology, Figure 2) or therapeutic procedures (damage control surgery, neurosurgery, laparotomy). In ECMO patients these transportations and procedures are at special risk of ECMO-related or general complications and they require special preparation and realisation. The following safety aspects and recommendations are given (Day 2010): 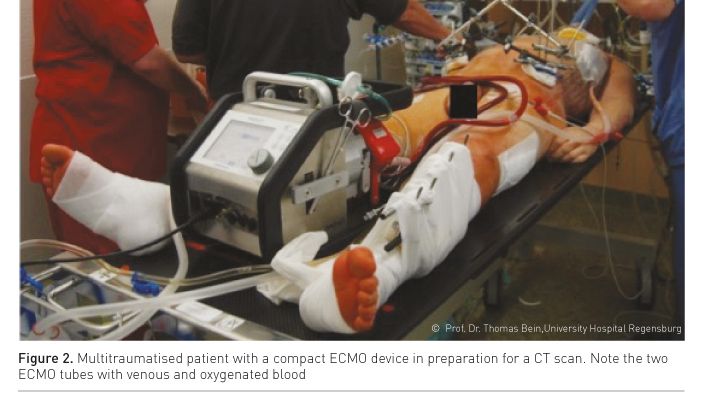 For surgery procedures a careful balance between volume replacement and avoidance of fluid overload must be ensured by experienced anaesthetists. Systemic anticoagulation should be stopped for surgery. In the scenario of the operating theatre, the ECMO cannulae are included in a sterile covering and special attention is required to avoid accidental removal. The results from recent observational studies (Cordell-Smith et al. 2006; Ried et al. 2013; Guirand et al. 2014; Jacobs et al. 2015) show that diagnostic and therapeutic procedures are associated with a low complication rate.

The technique of extracorporeal lung support is a promising and life-saving treatment option in severe post-traumatic ARDS. ELS enables a rapid and sustained improvement of critically impaired gas exchange and the correction of severe acidosis, and additionally can provide lung protective ventilation. Utilisation of ELS in multiple trauma patients is associated with an acceptable complication profile, but a specific expertise, routine, and an interdisciplinary approach are needed.

Thomas Bein received honoraria for lectures and for the membership of the Medical Advisory Board of Novalung Company, Heilbronn, Germany.

«« Top Tips for Tweeting at Conferences

Shock is an emergency, and if it is not treated, it will mostly be fatal. Early intervention and admission to the ICU is... Read more

Intensivists today are faced with a growing deluge of quantitative data, along with demands to implement evidence-based protocols... Read more

Centre for Research in Intensive Care

The Centre for Research in Intensive Care (CRIC) was established in 2015 to provide support and services for research into intensive care,... Read more