Are you seeing the potential benefits of conflict at work, or simply the pitfalls? 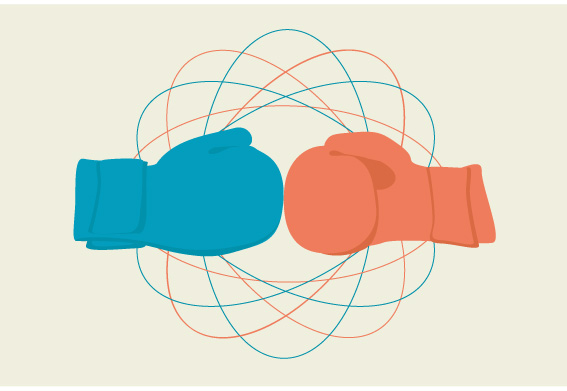 Chris was a brilliant and gifted practitioner. Well qualified. Hard working. Very experienced. Loved by everyone - clients and colleagues, as well as friends and family. Chris was very generous at work, always happy to lend a hand or be a trusted and insightful sounding board. Chris was happy to share ideas, which was particularly popular.

Except for her manager. Chris’s manager saw her as a nuisance, always challenging him and picking fault with his ideas. Not in front of the team, of course, and not really all that often, but he knew what she was up to. She wanted his job and was undermining him to get it. He felt he was losing face and had to stamp it out. So he did.

Chris could be anyone up and down the country, couldn’t she (or he)? An impressive professional who, for whatever unjustified and unjustifiable reason, was forced to leave. To move on.To stop being a pest. Or else. Like you, I k now from my work as a barrister, consultant, trainer and coach, specialising in employment law and human resources, this is sadly an all-too frequent occurrence. Whether it’s bullying and harassment, unlawful discrimination or whistleblowing—or simple a personality clash (it’s rarely t hat simple) — the world of work is losing a vast amount of talent and creativity because of conflict and an innocent lack of management capability in handling conflict.

Consequences and Benefits of Conflict

We all know that prevention is better than cure, so why is it that so many still need to work on prevention?

In terms of lost time the consequences of bullying and harassment, grievances, sickness absence, high turnover, low productivity and employment tribunals can cost weeks and months, not only days. Then there’s the astronomical financial cost. But it’s worse than this. Stifling conflict is killing your business, your team or department because people will be afraid to speak up—and that is REALLY ‘bad for business’.

If people won’t speak up then wrongdoing goes unchallenged. And if someone can get away with ‘X’ they might try and get away, not with ‘Y’, but with 2X or 3X or 10X… and over what might be a very short time their offences are on such a scale that the penalty if caught just has to be avoided—at ANY cost, including a very painful human cost.

If people won’t speak up then you are depriving your team of their expertise and creativity. You are cutting off a -potential- steady flow of great ideas, which can improve, streamline and harmonise relationships and productivity.

If you, the leader, are not making it easy—making it RIGHT —for your people to speak up you are also depriving yourself of a massive free resource. For many people it’s not their job to have ideas, to be creative, to tell their boss that there’s a better way. But many workers on the frontline can see it—screaming out at them as if it was signposted with a big red arrow. It’s a free additional resource, over and above their salary. Yet it’s gone.

What Can You Do?

You can begin by reframing your perspective on conflict. Conflict can often be a benefit. At an organisational level, what is the culture and ethos? Are you doing enough to create, build and maintain a culture that is open to challenge and constructive criticism? Open to people being wrong, to taking appropriate-sized risks and learning lessons, not attacking failures?

It’s a way to seek the all-pervasive continuous improvement. Are your people promoting creativity or looking for someone to blame? Massaging egos or seeking improvement through transparency? Do remember that if you want to change the culture of an organisation or team, it really does need to start at the top. If senior managers are asking middle managers and workers at the coalface to ‘do as I say, not as I do’ it just won’t work. It breeds contempt, not success.

At an interpersonal level, to be able to see conflict as a benefit, we need to consider both mindset and skillset, and the starting point is the right mindset. We have to build bridges, mend fences and move on—so much easier to say than to do. Anger and retribution won’t help, will it?

If you see conflict as bad, you will want to avoid it or squash it. In what is often referred to as ‘constructive conflict’ we look for the possibilities and creativity instead. If you were to see conflict as potentially helpful, you might welcome it more. You might encourage it more.

You might create a safe space to generate the benefits more often; maybe a team meeting, a brainstorm or buzz session actively encouraging a challenge to new ideas or old practices.

Develop what I call a ‘Fix Not Fight Mentality’. Resolve to identify the issue and find an effective way through it. To focus on the improvement—the solution—not on attacking the person who made the mistake or shooting the messenger.

When the red mist of anger starts to rise, remember to prioritise the ongoing, positive relationship. Seek the win-win way forward. You don’t have to be right and they don’t have to be wrong.

This mindset starts with a decision. DECIDE that you will do this. It’s important to actually pause and make this deliberate, conscious decision—not to just continue on autopilot, because that’s when emotions take over much more easily.

It’s not long is it? It’s not ten minutes. It’s not a minute and it’s not even a few seconds. It takes less than a second to hold your breath and keep your emotions in check. Maybe two seconds if they’re really pushing your hot buttons!

Rather than React—letting t he volcano erupt— instead let’s Respond. A measured response that takes a second or two to pause, breathe, think. That allows you to avoid saying the first (human, natural and quite understandable) thing that comes into your head—but which you will very probably come to regret.

As for your skillset, we can all work hard to develop our Visual, Verbal and Vocal communication (the 3Vs): body language, words and tone of voice.

I’m a great believer that questions are (usually) the answer. Get curious (not furious) – a mindset as well as a skillset. To create a natural pause, ask yourself questions. Not only will it help avoid the volcano effect, you might find it enlightening:

Also, ask the people involved for their views, engaging them in conversation instead of telling them what to do or to stop doing. Drawing from within them and really, properly, listening to understand. Mostly, however, we are not listening at all—we’re just waiting to interrupt!

Often it can make all the difference just to get the basics right. I facilitated a mediation recently for a food manufacturing business. Their invoicing, stock control and production had been hit hard due to the two women in the administration team falling out. Their manager, the HR Director and the Chief Executive had all spoken to them. I discovered that what they had not done enough of was listening to them.

The problem turned out to be that the older woman felt the younger woman didn’t show her enough respect. The younger woman felt that the older woman acted as if she was her mother. Obvious, really. The solution was simply to get back to basics: being receptive when the other person questioned them—so long as it was courteous and professional; and even as basic as saying “Hello”, “How are you?” and “Goodnight”. Yes, that basic.

So let me ask. How does your organisation or team—and how do you—measure up? Does your culture, mindset or skillset need a refresh? Most of us do.

Scott Johnston of Johnston Consulting is a barrister, trainer and conflict coach, having spent over 20 years specialising in employment law and HR consultancy. He is based in Glasgow, Scotland. www.MyConflictCoach.com

Pursuing a Culture of Safety: The Importance of Self-Regulation

Professional self-regulation is effective when dealing with staff with high numbers of patient complaints and coworker observations.... Read more

The Need for Clinical Audits in Diagnostic Radiology

Clinical audits will be mandatory for radiology departments in the EU from February 2018, but they do not need to be boring,... Read more

conflict, leadership, management Are you seeing the potential benefits of conflict at work, or simply the pitfalls?