Share
Download PDF
Findings from the DANFLU-1 trial presented at the ESC Congress in Barcelona show that high-dose influenza vaccination in older adults reduces the risk of death by 49% and the incidence of hospitalisation for influenza or pneumonia by 64% compared with standard-dose vaccination.
Several studies have previously investigated the association between influenza infection and cardiovascular events. For example, a six-fold increased risk of myocardial infarction in the week following a positive influenza test has been reported in a study; another study found that nearly 19% of heart failure hospitalisations could be attributed to influenza during the influenza season. Yet another study in adult patients hospitalised with influenza found that nearly 12% had an acute cardiovascular event.
High-dose vaccines contain 60 μg of haemagglutinin antigen for each strain, while standard-dose vaccines contain only 15 μg. Clinical evidence indicates that influenza vaccination can prevent cardiovascular events. High-dose vaccines are approved for adults 65 years and older, but only a few countries offer high-dose vaccines by default. Despite evidence of additional protection against influenza and influenza-related morbidity, high-dose influenza vaccines are not widely implemented.
The DANFLU-1 trial was organised in a central location at a public university hospital and considered over 1000 vaccination sessions across Denmark. Older adults aged 65 to 79 were included in the study and were randomised 1:1 to either high-dose or standard-dose quadrivalent influenza vaccine.
The goal was to estimate the relative effectiveness of the high-dose influenza vaccine compared with the standard dose for a range of cardiovascular and respiratory endpoints. Twelve thousand four hundred seventy-seven participants were included in the final analyses. Six thousand two hundred forty-five adults received the high-dose vaccine, while 6,232 received the standard dose. Approximately 20% of the trial participants had chronic cardiovascular disease compared with 22.9% of the national population.
Based on the findings of the study, adults who received the high-dose vaccine had a lower incidence of hospitalisation for influenza or pneumonia compared with standard-dose recipients. High-dose recipients also had a lower incidence of all-cause mortality. No significant differences were observed in adverse events between the high-dose and standard-dose groups. 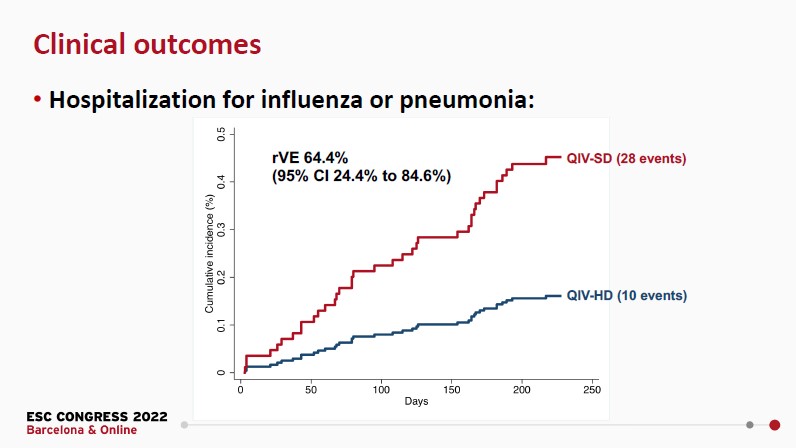 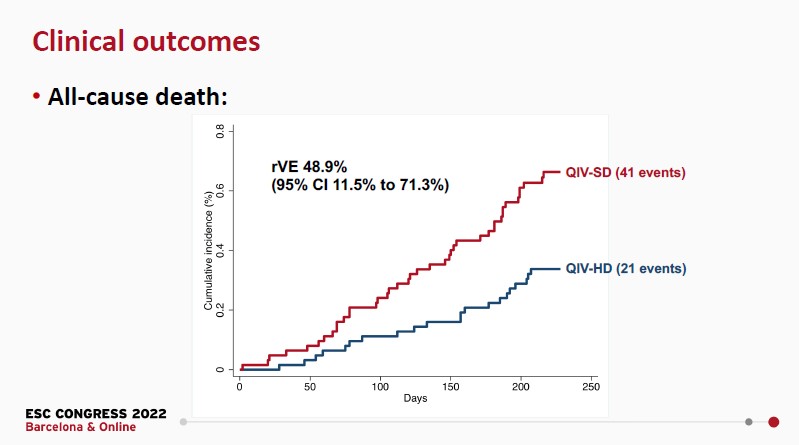 The reductions in hospitalisations and all-cause mortality with the high-dose vaccine are encouraging but study researchers believe confirmation in a larger trial is necessary before guiding clinical practice.
Source: ESC Congress 2022
Image Credit: ESC Congress 2022