Share
Download PDF
The latest research presented at the ESC Congress in Barcelona shows that conventional smartphone-assisted atrial fibrillation (AF) screening more than doubles the detection and treatment rate in older people compared to routine screening.
AF is the most common heart rhythm disorder and affects over 40 million people worldwide. People with this condition have a five times greater risk of stroke compared to those who don't. AF is difficult to diagnose because sometimes it has no symptoms. This leaves patients unprotected from stroke.
Studies have shown the potential of smart devices for AF screening. However, no comparison has been made of this methodology with conventional screening, and many of these studies have included younger adults who are less likely to suffer from this condition. Therefore, it remains unclear to what extent older adults would benefit from AF screening with smart devices, whether they would be able to cope with digital technology and whether screening results in the initiation of oral anticoagulation.
The eBRAVE-AF trial included older adults at risk for stroke and who owned a smartphone. Researchers compared smartphone screening with usual screening for the ability to detect AF, which was then treated with oral anticoagulation. Study participants were 50 to 90 years with no known AF and no prescription of oral anticoagulants.
A total of 5551 patients participated in the study (31% were women). Participants were randomly assigned to a six-month digital (2860 participants) or conventional AF screening strategy (2691 participants). Those in the digital group downloaded an app to their smartphone that measured pulse wave irregularities. All they had to do was place their finger on the smartphone's camera. Participants measured twice a day for 14 days, then twice a week. They were also provided with a patch to record a 14-day ECG which they returned by post. In case of abnormal readings, the researchers evaluated the ECG, sent the results to participants and asked them to consult their local physician.
In the conventional group, AF screening was conducted according to real-world practice, which can be by symptoms, routine ECG screening, and other methods. Information on newly detected AF was collected by the researchers via app-based questionnaires, telephone calls as well as insurance claims data for both groups.
The primary endpoint of the trial was newly diagnosed AF within six months leading to initiation of oral anticoagulation. As per the findings of the study, the primary endpoint occurred in 1.33% of the participants in the digital group and 0.63% of participants in the conventional group.
Those who did not reach the primary endpoint in the first six months took part in a second six-month study phase with crossover assignment to conventional or digital screening, respectively. Four thousand seven hundred fifty-two participants entered the second study phase. Again, digital screening was superior to conventional screening in detecting AF. 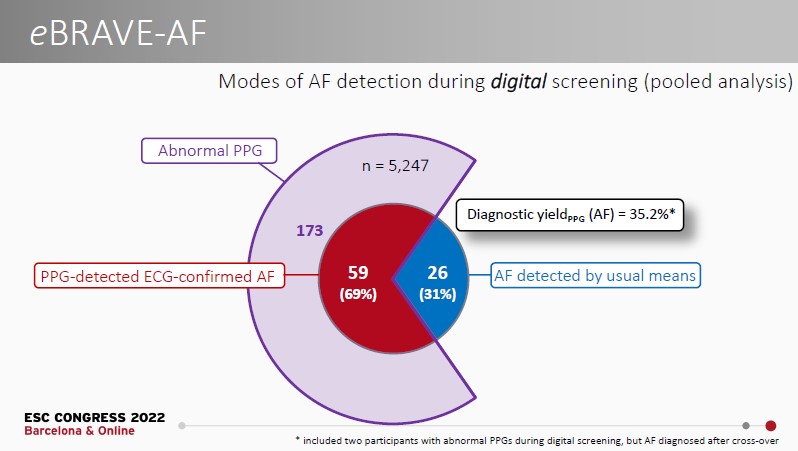 The University of Cincinnati is part of a multimillion-dollar grant from the National Heart, Lung, and Blood Institute to study... Read more