Programmed to under-perform? This is how some healthcare managers may feel when they go home after a typical day at work, according to a recent white paper ‘What Does Being in Over Your Head Look Like’. In reality, the average healthcare organisation creates leadership alignment (the right people in the right roles) approximately 55 percent of the time. Realistic expectations for leadership appointment should target 85 percent alignment, by using a structured approach to determining their future leaders. The difference of having the right leaders in place can show as much as a 75 percent increase in operational performance over time.

There are several common appointment mistakes that may lead to sub-optimal performance, where newly appointed healthcare leaders and managers whose talents are not best matched to a new role, can end up in over their heads.

The easiest way to describe the condition is where a department’s complexity (degree of difficulty) exceeds the threshold at which a manager has higher odds of success (typically above a 50 percent rate). There are different levels of ability. For a ‘C’ level ability, this is virtually any management job, since their chances of success are at best just 40 percent (in the lowest complexity positions). The decision to appoint a ‘C’ level manager to high positions is justified only when challenges are easily managed, or if the manager has an exceptional ability to manage day-to-day operations.

How about ‘B’ level managers? As cited by Thomas J. DeLong and Vineeta Vijayaraghavan in their 2003 ‘Harvard Business Review Article’, ‘Let’s hear it for B players’, managers at the ‘B’ level are solid, consistent performers. They are competent, experienced, consistent and loyal.

These managers make up the backbone of any organisation, and typically account for between 50 percent and 55 percent of executives. In our research, the bulk of healthcare IT managers are usually at the ‘B’ level. For ‘B’ level leadership talent, the ability to manage low and medium complexity tasks produces favourable results, respectively, 75 percent and 60 percent of the time (see Figure 1). The only cases with low odds of success (and are ‘in over their heads’) is when they are appointed to complex assignments or departments, accompanied by a high degree of difficulty. It is here that the chances of success dip to 45 percent. This is not to say that they cannot be successful; it is just less likely. If a decision is made to appoint ‘B’ level IT managers to such a level of complexity, it is crucial for CIOs to ensure that they ‘over achievers.

Other attributes of “B” level leaders are: 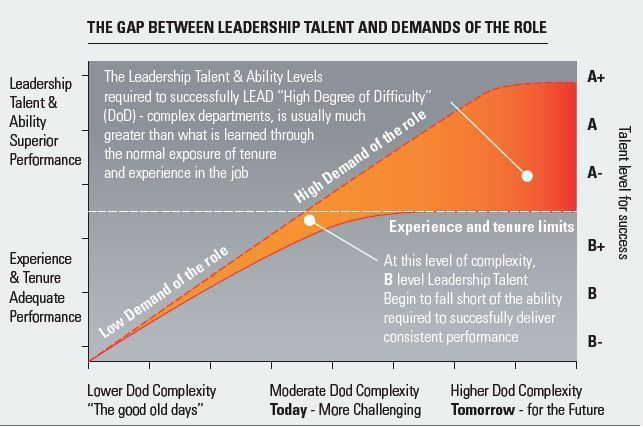 In such a light, there are seven typical appointment mistakes which organisations make:

Numerous consultants promote the hiring of only ‘A’ players to leadership and/or total employee positions. If less than .01 percent of healthcare organisations can achieve this level of human capital recruitment, hiring and appointment, how realistic is it as an aspiration? The last organisation that tried to create a culture of all ‘A’ players was Enron.

Another name for this business practice is ‘Top Grading’, where selection only screens for the best talents, while the performance management practices cut a percentage of the total employment base (GE is famous for cutting 10 percent of its bottom performers every year).

Such a philosophy will simply not work at healthcare organisations. In the final analysis, the healthcare business, like others, is a team sport.


Programmed to under-perform? This is how some healthcare managers may feel when they go home after a typical day at work, according to a recent white pape...

ACUSON SC2000 PRIME is an ultrasound system that provides you workflow efficiency and precision required at every step of the care pathway. You get the complete Structural Heart Disease solution with a full suite of imaging options and 1-click AI-powered...

ACUSON Juniper Ultrasound System
Everything you need, nothing you don't.

The ACUSON Juniper Ultrasound System is a high-performance, shared service system that empowers you to image every patient with great diagnostic confidence. It offers powerful capabilities built into one of the smallest market footprints in its class....

Built specifically around the way you work, the ACUSON NX3™ series ultrasound systems are simple and uncomplicated, yet powerful. When form meets function, the result is an intuitive and smart ultrasound system that will help promote your highest levels...