Access to Cardiovascular Technology Across Europe: The Role of Financing

Overcoming inequality in access to innovative technologies, while ensuring the long term financial sustainability of healthcare systems represents one of the strongest challenges for European governments. Discrepancies in resource allocation are still extant, on both health expenditure on GDP and on per capita spending on medical technology especially between Western and Eastern countries.

Homogenising access to cardiology services is of primary importance because it is the clinical area where innovation in medical technologies and practice can contribute the most to achieving life-saving gains. 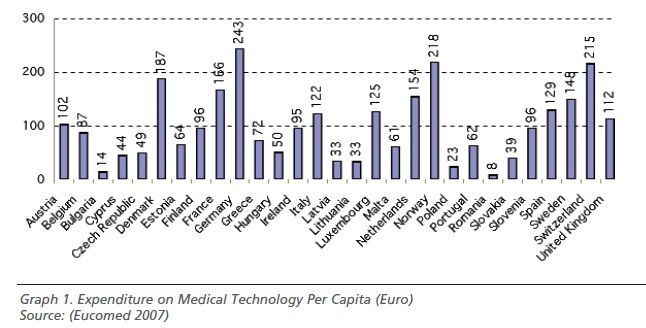 Patient access to cardiology technology differs significantly across European countries. Implantation rates of implantable car-dioverter defibrillators (ICD), for instance, increased on average by more than 36% in the 2005 - 2007 period; nevertheless, in 2007 figures range from 232 implants/per million inhabitants (p.m.i.) in Germany to 53 implants p.m.i. in Greece (see graph 2). Variability in the current levels of technology utilisation can be determined by three macro-drivers:

(i) Organisational Drivers: factors related to the availability of infrastructures and facilities (i.e. number of catheter laboratories or emergency services per thousands inhabitants), as well as to the structure of the cardiac care delivery network (i.e. adoption of hub and spoke systems between providers in the area); 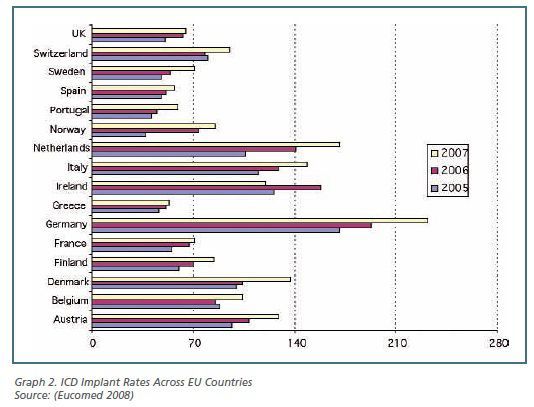 The latter driver encompasses three dimensions equally, potentially influencing access levels to the same technology across European countries. These are:

Financing ICDs and Coronary Stents in the EU

Policy for financing medical technology (the third macro driver) differs both across countries and classes of device. An analysis of the mechanisms adopted by five countries - Germany, the UK, France, Italy and Spain is presented here, with reference to ICDs and coronary stents.

Each of these five European countries provides public coverage to the selected technologies; nevertheless, different degrees of explicitness characterise their inclusion in the official lists of health services guaranteed

to citizens. Explicit listing is ensured by the Spanish (Real Decreto 1030/2006) and French regulations (Liste de Produits et Prestations Reimbursables - LPP) while in Italy and Germany it is rather the casefee- payment system adopted for the reimbursement of inpatient services that indirectly defines the list of technologies included in the basket.

Public tenders at single service provider level are the predominant purchasing mechanism for both technologies. Countries, nevertheless, register an increasing tendency towards the centralisation of procurement processes with the aim of leveraging economies of scale and increasing market power.

Hospital cooperatives have been established either at local (UK), regional (Italy and France) or trans regional (Germany) level. With the consolidation of large top-down binding consortia, nevertheless, purchasing decision-making seems to focus predominantly on cost savings. This leads to a reduction of the input of clinicians and professionals, whose opinions are of paramount importance for the uptake of high tech lifesaving devices. In Italy, moreover, explicit measures to regulate the offer were approved in 2007 with the introduction of national reference prices to be used as maximum ceilings for future tenders; up till now, four categories of coronary stent have been identified, and corresponding prices range from 505 euros to 1,486 euros.

Major differences between the five countries can be observed as to reimbursement regimes. Currently two main funding systems are applied: global budget and case based schemes. Global budget schemes are predominant in Spain. A programme contract with explicit indication of the overall spending target is agreed upon annually between the Health Services of the Autonomous Communities and the hospitals on the basis of structural and complexity (case mix activity) elements (Sanchez- Martinez et al. 2006). Although in principle, the system may guarantee a higher degree of flexibility and total cost control, access to innovations is highly dependent on the criteria applied for budget determination. It becomes therefore essential not to rely exclusively on incremental adjustments of past allocations, but rather to strengthen other mechanisms of coordination and monitoring, such as internal commissions composed by both clinicians’ and hospital managers’ representatives, in order to ensure constant access and uptake of high quality technologies.

Case-based schemes are well-established in Italy and Germany (Diagnosis Related Groups - DRGs) and recently adopted also in France (Groupes Homogène de Séjour - GHS) and the UK (Healthcare Resource Groups - HRGs). Hospitals are paid a tariff for each discharge, which should cover all the operating costs for ICDs/stent procedure.

Current funding arrangements deeply vary across the four countries, with reference to:

Classification Coding: All countries have introduced specific codes for both ICD and stent implant procedures, even though with different degrees of specification; in particular, German classification appears to be the most analytical and regularly updated.

Tariff Setting and Update: In France and the UK the tariffs cover only the implant procedure, whereas devices are separately reimbursed through additional payments, either fixed at national level such as in France, or subject to local negotiations between commissioners and providers such as in the UK.

In Italy and Germany, by contrast, DRG tariffs are supposed to also cover the cost of the technologies implanted. Italy is nevertheless characterised by a high fragmentation between regions, in terms of introduction of supplementary fees on the top of the tariff (as in Lombardy or (Health Econ Write Ltd) Campania), or adoption of different fee schedules according to the type of device implanted (e.g. Drug Eluting Stents or Bare Metal Stents). In Germany, ad-hoc surcharges can be agreed at hospital level for two specific types of stents (coronary bifurcation stents and antibody-coated coronary stents), classified as innovative diagnostic and treatment methods (NUB).

Control of the System: Even though case based systems have been introduced to promote efficiency, they might lead to cherry picking of patients. Countries have therefore acted differently to guarantee equity of access and appropriateness of treatments for patients, for instance establishing independent valuation bodies (NICE in the UK or IQWIG in Germany).

Coverage, procurement and reimbursement the three components of a technology financing system – should not be considered as simple payment methods but rather as tools that, if properly regulated, can contribute to achieving higher degrees of equity in access to health services. Nevertheless, it is essential to reaffirm the importance of the other two drivers and, in particular, the professional dimension. Clinicians need to consolidate their role as stakeholders during all phases of the process.

This implies the need to invest in continuous training and education in order to not only to master their scientific field, but also to acquire managerial skills that will become essential to lead future healthcare organisations.


Overcoming inequality in access to innovative technologies, while ensuring the long term financial sustainability of healthcare systems represents one of t...

ACUSON AcuNav Volume ICE Catheter
When lives are at stake, you take command

Now you can see more of what you want, when you want. The next generation of visualization puts you in command. Master the new landscape of structural heart disease procedures Challenging cases are on the rise   As the population ages, more...

Helping to identify the severity of congestive heart failure and risk stratification of acute coronary syndrome   The Stratus ®  CS Acute...